As I turn in my final trimester grades, I think about my students and can't help but think about traxoline. This bit of educational humor/realism is often attributed to Judy Lanier.

Every adult and student I have talked with scores 100% on the post-test. However, not one of them knows a thing about traxoline, or for that matter, cares. But had this been a real quiz, each person would have received an "A."

It is very important that you learn about arcellacean taphonomy. Arcellaceans are a major group of testaceous rhizopods. During preservation in any depositional environment, taphonomy produces different thanatocoenoses from extant biocoenoses. Thenatocoenoses are the result of differental preservation during burial, but differ between environments of deposition due to differences in original biocoenoses and soil biogeochemistry. Arcellaceans are one of our most useful paleoindicators for lacustrine environments.

I could write many similar examples from my own curriculum. This is one reason I never use the multiple-choice and vocabulary tests in the back of the science test supplementary resources. Public school is a game in many ways, and many kids have learned to play it without actually absorbing any knowledge.

Science isn't about memorization. Science is about being curious, asking questions, exploring data, asking more questions, researching, and making connections between what you learn and what you already know. These are hard things to measure on a 90 - 80 -70 - 60 grading scale.

I am not really even a fan of "hands-on" learning for "hands-on" sake. Kids can go through the motions without ever engaging in any real learning. That's why I think it is so important to work with predictions and make those connections between kids and their learning. This is more "hand-on, minds-on" learning. Such activities focus more on predicting, asking questions and thinking scientifically and actively rather than training passive learners to earn "A's" through the successful completion of tasks. Science shouldn't be about memorization.

It's okay to say, "I don't know" to a student's question, if fact it is important to do so, so long as that response is followed by "let's find out". Science is about the finding out. The knowledge accumulated by centuries of science in practice is needed to solve new problems. No one has all of the answers, but everyone can learn to think scientifically. This includes the skills of knowledge acquisition and problem solving.

As written in a previous post, I couldn't agree more.
Posted by C. Mytko at 3:26 PM 1 comment: 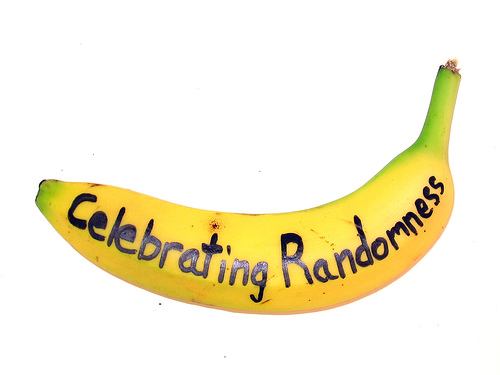 The other day, a student approached me waving a piece of notebook paper.

The subject was bananas.

Curious, I took the paper, read it, and smiled. It was an assignment done for her language arts class, but she wanted to share it with me.

When asked the inspiration for her art, the student replied that she wrote it "because in health class, we had to pick a fruit or vegetable to do a poem on, and I picked a banana" and she showed me because she knew I was "amused by bananas." (She must have been tipped off by my post celebrating bananas, as well as the banana sock tacked to my bulletin board....) She agreed I could publish the poem to my next banana post.